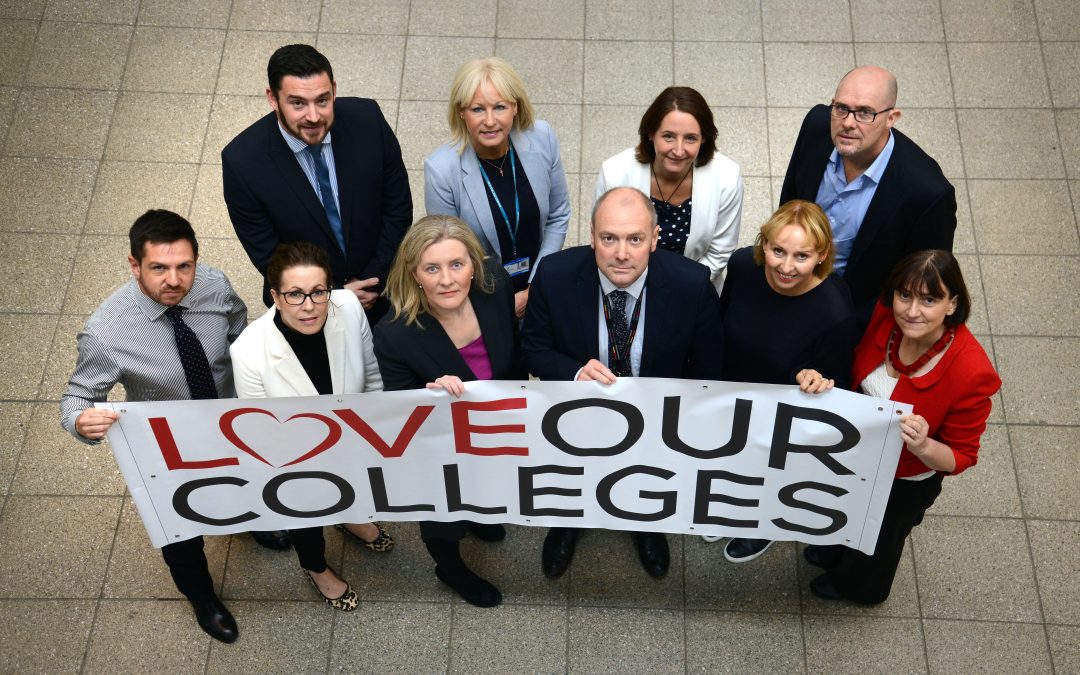 Principals, staff and students from further education colleges across the North East will next week march on Parliament to demand increased funding after a decade of decline.

The unprecedented joint action will see college CEOs protest alongside colleagues, learners and education unions in a rally at Parliament Square next Wednesday.

‘Love Our Colleges’ is calling on the Government to increase 16-19 funding by five per cent a year for five years and provide additional ring-fenced funding for pay, reversing cuts over the past decade which have seen college funding cut by 30 per cent.

The campaign, part of the Colleges Week celebration from October 15 to 19, follows a report from the Institute of Fiscal Studies which shows funding for students in school sixth forms and FE colleges has been “severely squeezed” since 2010.

Its inaugural annual report on education spending found that while funding for early years has gone from almost nil to £3bn since the early 1990s, and spending per student in higher education has risen by nearly 60 per cent since 1997, there has been an “almost complete lack of growth in spending on further education”.

The Association of Colleges says the impact of the cuts has included fewer hours of teaching and support for young people, a drastic reduction in the number of learning opportunities for adults, and the value of staff pay falling by over 25% since 2009 – with college teachers earning £7,000 less on average than school teachers.

It is calling on the Government to:

Darren Hankey, Principal of Hartlepool College of Further Education, said: “The inaugural Institute of Fiscal Studies education report was a real eye opener in terms of how far our wonderful sector has fallen behind that of other areas of the country’s education system when it comes to funding.

“In a report full of key statistics, the one which stood out most for me was the fact the sector is funded at only ten per cent more in real terms than it was in 1990. A ten per cent real terms increase in 30 years!

“The ways in which this woeful funding situation impact colleges are numerous; there has been a recent story of one college not giving a pay award for ten years.

“For me the biggest impact is on the country’s 16, 17 and 18-year olds and I would argue that the current approach to funding further education and skills is letting down these students.

“Much is made of social justice and trying to do the best for people from all walks of society. For me, if we’re truly serious about opportunity and social justice, better funding of the English further education and skills sector is a must.”

Chris Todd, Principal and Chief Executive at Derwentside College, added: “It is simply wrong that the Government continues to expect colleges to deliver high quality education and training within the current funding envelope.

“Colleges have done everything they can over the last ten years to absorb these continued cuts in funding but there is only so much you can trim and still deliver a quality service to students.

“I want to see colleges admired for the hugely valuable work they do, and funded appropriately. What we urgently need is a long term funding strategy for further education, providing the resources and certainty colleges need to plan ahead with confidence and to focus on what is important: the skills of our future workforce.”

Stockton-on-Tees based car parts manufacturer Nifco, which recently announced record sales of £75m, is one of the thousands of employers in the region who benefit from the training and support from local colleges.

The firm’s General Manager of Engineering Andy Dunn, also Board Chair at South West Durham Training in Newton Aycliffe, said: “At Nifco UK we have great relationships with a number of colleges and training centres across the North East.

“In advanced manufacturing and engineering, there is a massive amount of the job that can be learned through ‘on the job’ training, but there is so much that can’t. The facilities at our partner education establishments offer the best of both worlds; they have heavily invested in the equipment needed to replicate a live factory, creating seamless, hands-on learning for the young person, as well as the space and support needed for the theory.

“In our industry, we are seeing an increasing skills gap and one of the ways we are managing this is through grass roots training. To support this, we need colleges to continue to provide the incredible facilities they do, but this comes at a cost and they need increased financial backing to be able to deliver what industry needs.”

Caroline Rowley, Area Director (North East) at the Association of Colleges, said: “It’s great to see so many colleges in the North East coming together and campaigning for a common goal. Colleges are critical to economic prosperity and do so much to improve the skills of the 2.2 million people learning in these institutions every day. But for colleges to continue to be able to provide outstanding provision, they need to be funded adequately.

“Government funding has been cut by an average of 30 per cent in the last decade, teacher pay has dropped by a third and the average amount of teaching hours students get is much less than their OECD counterparts. We need to stop short-changing our students if we’re to have the economy we need, especially with Brexit looming.

“This week we are encouraging college staff, students, parents and the wider community to showcase why a lack of investment is hampering this great sector. Colleges are great vehicles for change and success, but to have that, they need the right level of funding.”

UCU regional official Iain Owens added: “For too long the fantastic work done by colleges and their staff has been overlooked and undervalued. Cuts to college budgets have led to cuts in opportunity for local people. If the government really wants to boost the nation’s skills it must prioritise proper investment in our further education institutions and their staff.”