6,000 JOBS FOR COUNTY DURHAM IF NEW BUSINESS DISTRICT IS APPROVED 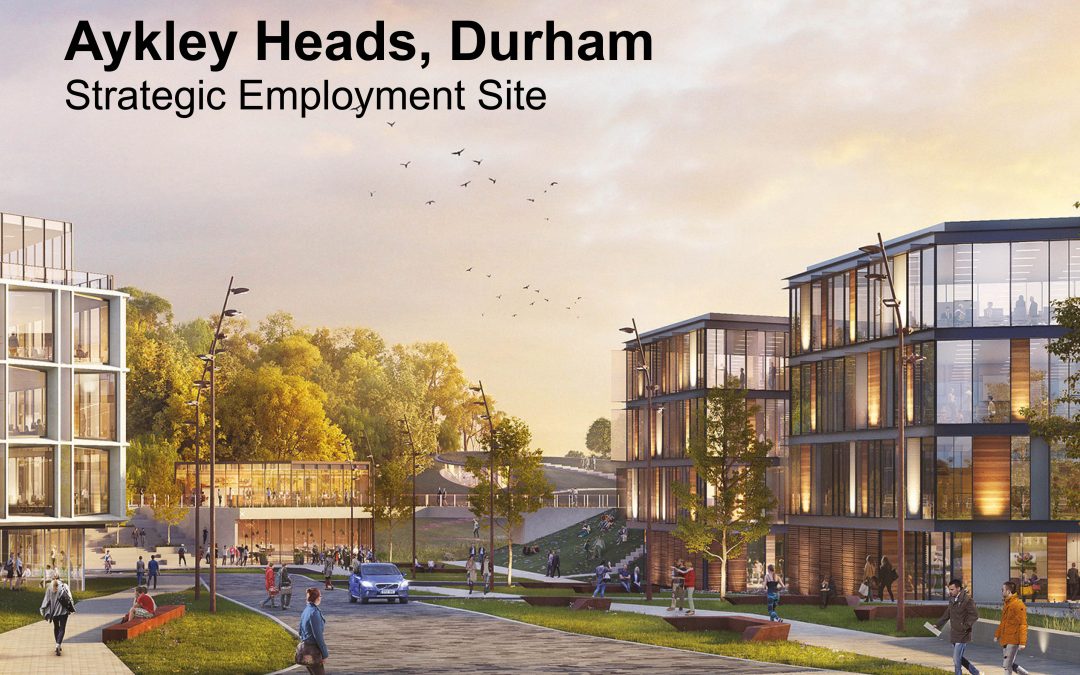 Hailed as a ‘once in a generation’ opportunity to help transform the county’s economic prospects, Durham County Council’s Cabinet members will consider a detailed analysis of the Aykley Heads site when they meet at County Hall on 17 January. The paper is the result of expert and independent analysis undertaken since an outline business case was agreed by the council’s Cabinet in July 2016. At that time an outline report indicated that

the creation of a new central business quarter capable of attracting thousands of high quality private sector jobs on – Aykley Heads – home to Atom Bank and Salvus House – could represent a game-changer for the county. Further research now completed, supports this early analysis.

If members agree the way forward next week – the site is set to become one of strategic economic importance to the North East as well as the county.

Hosting more than 30 businesses already with 1,300 jobs (excluding the council), Aykley Heads is quickly establishing itself as a premier private sector location. The decision by Atom Bank to set up its global HQ there was quickly followed by sustained interest in the council’s business start-up and expansion incubator, Salvus House. The facility was opened in September 2017 and is already providing an employment base for more than 120 people – with a target of 200 over the next 11 months. It’s anticipated it will be at capacity in the near future.

Independent analysis identifies that the city does not currently offer sufficient premises for business growth despite the fact that half of the enquiries made in the North East are from businesses which would consider locating in Durham.

Aykley Heads, sitting in an established parkland setting with views of the UNESCO World Heritage Site – and just a few minutes’ walk from a mainline rail station and the city centre is considered unique in the region. If agreed – the proposals before members would kick-start the process of the site becoming a major centre of private sector employment with a clear focus on quality jobs in areas such as finance, banking and legal services.

The plans for the site also respect the natural landscape and will ensure quality employment prospects for local people – with particular emphasis put on graduate spin offs and research and development.

If the masterplan is agreed, as per the July 2016 decision, the council would agree to relocate to smaller, more affordable city centric accommodation. This in turn would pave the way to transform how the organisation operates and enable more modern ways of working and service delivery.

A relocation of the council’s HQ would also mean that the development of four refurbished strategic sites around the county will continue at Seaham, Meadowfield, Green Lane in Spennymoor and Crook, with increased staff numbers in these locations.

Cllr Simon Henig, Leader of Durham County Council, said: “Paving the way for the development of Aykley Heads as a strategic employment site represents a once in a generation opportunity to attract thousands of jobs for Durham and put hundreds of millions of pounds into the county’s economy. Providing a high quality development within the beautiful natural landscape, with views of the World Heritage Site, and adjacent to the mainline train station with access to London in under three hours is a fantastic opportunity not just for the county, but the wider region.

“Our business case is robust and well evidenced, but alongside this, a key principle for us in vacating the site will be to ensure that interested businesses provide high quality jobs and opportunities for local people.

“This is vitally important as it will enable investment that will bring more and better jobs to our residents, with a real focus on retaining our gifted and talented young people who often leave to pursue their careers in other parts of the country. Freeing up this site for private sector investment is a real game-changer for Durham.”

North East Local Enterprise Partnership Chair, Andrew Hodgson says the establishment of a sector specific business cluster in Durham would have huge benefits to the regional economy: “The North East Strategic Economic Plan sets out an ambition to generate 100,000 more and better jobs for the North East economy by 2024. About 50,000 of these jobs have already been created – so another 6,000 jobs would count for more than 10 per cent of the remaining total we have to go.

“The new businesses this development will attract on Aykley Heads can contribute further to the economy via the supply chain that will develop around these businesses. Experience tell us that from the potential  6,000 new  jobs created on Aykley Heads there would likely be a further 6,000 jobs generated across the region to support them. It’s a very important opportunity for the region.”

Durham is already benefiting from significant existing positive regeneration developments right across the county. These include:

Extension of Netpark at Sedgefield;

Investment in both cultural activity and infrastructure in Bishop Auckland;

Milburngate and The Gates developments in Durham City;

Hitachi which planned to create 730 jobs in Newton Aycliffe is already employing over 1,200 staff;

Res-Q moved to Seaham in 2016 with plans to employ around 1,200 people within three years.

More than £3 billion is currently being invested across the county, bringing thousands of new jobs and very significant economic benefits. Research indicates Aykley Heads could play a unique part in bolstering this success.

Cllr Joy Allen, Durham County Council’s Cabinet member for transformation, said: “We are without doubt at a pivotal moment for the future of our county, but also for us as an organisation.

“These plans would also enable us to transform how we operate, with a focus on workforce development in a smaller, modern and fit for purpose environment that can support a more dynamic and flexible approach and where the operating costs can be significantly reduced.

“Not only is the current HQ on a site that is now recognised as a prime development location for the private sector but it will actually cost more to modernise it than it would to build a new one.”

The proposals for a new business district in the city have reached this point following work over a three year period to develop and test the plans for a strategic employment site and new HQ. Alongside this, work has already commenced in Crook to support employees to work more flexibly. A move by the county council from its current site would also offer exciting possibilities for a new home for the archive collection, which continues to grow. The public would be consulted on this and options for a potential history centre.

The recommendations relating to the Aykley Heads masterplan ask that Cabinet:

Notes the high-level options available to bring forward the delivery of the Strategic Employment Site and agree to a receive a subsequent more detailed report on delivery arrangements in Summer 2018;

Cabinet meets on 17 January at County Hall and the full Cabinet paper along with the evidence base and all recommendations linked to the Aykley Heads master plan, Archives potential and new HQ can be viewed here https://democracy.durham.gov.uk/ieListDocuments.aspx?CId=154&MId=9127&Ver=4

The public can learn more about the Aykley Heads master plan at www.durham.gov.uk/AykleyHeads