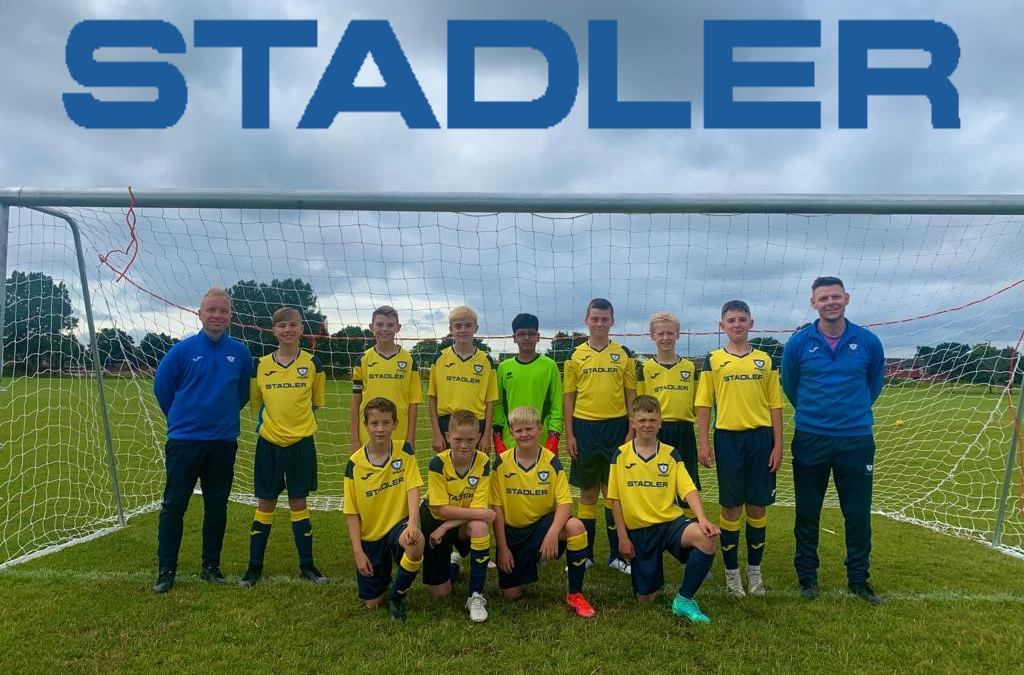 Stadler sponsors Whitley Bay Football Club Under-13s Team
Almost a year after Stadler took on responsibility for running the Tyne and Wear Metro trains, the Swiss rail builder has decided to offer financial support to the Whitley Bay Football Club, helping two members of staff set up a team for children aged 13 and under. Stadler is based at Gosforth depot and eager to play a role within communities in the north east. Within a year since its arrival in Newcastle, Stadler is delighted to be getting involved in community activities and pleased to be helping two employees, Ronald Farlow and Wayne O’Brien establish a football team for under 13s within the Whitley Bay Football Club. Ronnie and Wayne approached the business, explaining that they hoped to do this and asked whether Stadler could help finance the initiative. The two of them will run the team and both have 12-year old sons in the squad. With the Stadler logo on their shirts for the first time, the team are playing a few friendly games and a tournament over the coming weeks, ahead of the start of the league season in September. Ronnie said: “Delighted to have Stadler sponsoring our brand new team, I’ve lived in the area now for nearly 20 years and football here in the north east is the very heartbeat of the community. To give children an opportunity to be part of this is what makes coaching football so special. Sponsorships such as this from Stadler allow the kids to all be kitted out with brand new strips and gives them the feeling of belonging to something special. Looking forward to the season ahead and introducing Stadler into the local area.” Wayne added: “This is a fantastic opportunity to provide local children with an environment conducive to furthering their development, on and off the field, which wouldn’t be possible without the generosity of Stadler. I’m eagerly anticipating the start of the season, and looking forward to sharing our journey, and hopefully some successes, with Stadler.” Rob Baxter, managing director for Stadler in the UK, commented: “We’re genuinely keen to play our part in the local communities our trains serve, so when Ronnie and Wayne made us a proposal to sponsor a football team for children, it didn’t take us long to work out that this was a great idea for everyone. We will be watching their progress avidly and wish them all the very best for the coming season.” In February last year, Nexus awarded a contract to Stadler to manufacture a new fleet of 42 trains for the Tyne and Wear Metro, build a new depot at Gosforth to accommodate them and maintain them for 35 years. Eight months later, in October 2020, Stadler became responsible for maintaining the legacy fleet. Stadler’s contract is with Nexus, the public body that owns and manages the Tyne and Wear Metro. Find out more about the new Tyne and Wear Metro fleet at www.nexus.org.uk/newmetrotrains