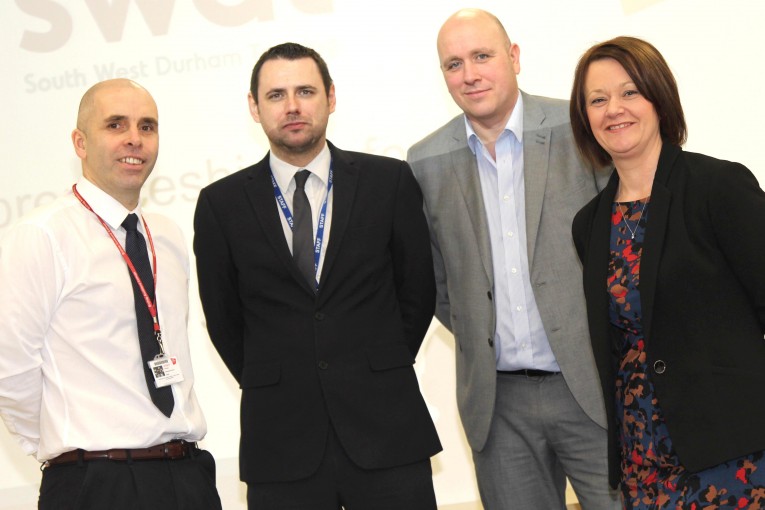 Some of the region’s biggest employers have been urged to take advantage of the apprenticeship levy, which comes into force this year.

“We keep hearing people talk about a skills gap for our 16-24 year olds, but it stretches right throughout our businesses,” said Ben.

“One of the key areas we’re looking at for SME’s in the county is succession planning. People at the top can’t move on without having people with the necessary skills ready to move up. We need to use the levy to turn around the staff we have and achieve a quality of people we can utilise in businesses.”

Former Ebac MD, Pamela Petty, now chair of Bishop Auckland College board and a director of Aycliffe Business Park Community, an apprentice herself, said: “I understand the strain businesses are under, but I’m a massive believer in the apprenticeship model – on (left to right): SWDT senior business development officer Ian Nelson and chief executive the job experience with off the job learning.

“One of the good things about the levy is that there’s actually more funding available in the new system for older people, as it’s not just about 16 year olds any more. There are opportunities for people in companies now who have a really good attitude and understanding of the business to up-skill themselves.

“It’s really important we not only take on the commitment of taking on apprentices, but also work with them and give them the time to learn.”

SWDT chief executive Lee Childs an engineer from Shildon served his time with SWDT 16 years ago and took over as CEO in October 2015. He said: “The apprenticeship reforms might seem quite daunting to employers. They’ll have to handle a digital account and manage their levy pot, but rather than being afraid of it, businesses must embrace it, and actually see the changes as an opportunity”. “We want to talk employers through the levy and how the changes will affect businesses.”

All are on engineering or manufacturing programmes with bespoke elements required by their employer, including hydraulics, pneumatics, electrical, fabrication and welding. SWDT now has more than 300 learners on the books across all years and a number of new customers. SWDT, a subsidiary of Bishop Auckland College which employs 27 staff, celebrates its 50th year later this year.